How should we interpret the $5sigma$ threshold in this research on climate change?

This message in a Reuter’s article from 25 february is currently all over the news:

They said confidence that human activities were raising the heat at the Earth’s surface had reached a “five-sigma” level, a statistical gauge meaning there is only a one-in-a-million chance that the signal would appear if there was no warming.

I believe that this refers to this article “Celebrating the anniversary of three key events in climate change science” which contains a plot, which is shown schematically below (It is a sketch because I could not find an open source image for an original, similar free images are found here). Another article from the same research group, which seems to be a more original source, is here (but it uses a 1% significance instead of $5sigma$).

The plot presents measurements from three different research groups: 1 Remote Sensing Systems, 2 the Center for Satellite Applications and Research, and the 3 University of Alabama at Huntsville.

The plot displays three rising curves of signal to noise ratio as a function of trend length. 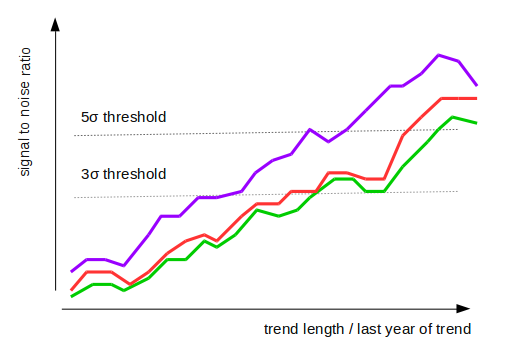 So somehow scientists have measured an anthropogenic signal of global warming (or climate change?) at a $5sigma$ level, which is apparently some scientific standard of evidence.

For me such graph, which has a high level of abstraction, raises many questions$^{dagger}$, and in general I wonder about the question ‘How did they do this?’. How do we explain this experiment into simple words (but not so abstract) and also explain the meaning of the $5sigma$ level?

I ask this question here because I do not want a discussion about climate. Instead I want answers regarding the statistical content and especially to clarify the meaning of such a statement that is using/claiming $5 sigma$.

$^dagger$:What is the null hypothesis? How did they set up the experiment to get a anthropogenic signal? What is the effect size of the signal? Is it just a small signal and we only measure this now because the noise is decreasing, or is the signal increasing? What kind of assumptions are made to create the statistical model by which they determine the crossing of a 5 sigma threshold (independence, random effects, etc…)? Why are the three curves for the different research groups different, do they have different noise or do they have different signals, and in the case of the latter, what does that mean regarding the interpretation of probability and external validity?