I’m having trouble following this guide on Ubuntu 18.04 when working with a specific repository (if anyone would like to follow along, the repo is here). When I try to follow this step:

Select Remote-Containers: Open Folder in Container… from the command
list that appears, and open the root folder of the project you just
cloned.

I run into an issue where Visual Studio code asks me to “Select the keyboard layout for this machine.” As follows:

But I’m unable to actually type in the terminal in VS Code to choose a keyboard? I’ve found a couple other responses to this here where you can do something like this inside the dockerfile: DEBIAN_FRONTEND=noninteractive apt-get install keyboard-configuration But that doesn’t seem to solve the issue either. I’ve tried this entire process on a Macbook just to make sure it’s not just me and it gets past this step just fine, which makes me think it’s an Ubuntu-related problem (or at least vs code on ubuntu problem) but I’m at a bit of a loss on how to get past this.

You can see the dockerfile here (if it helps):

Sometimes, typically in the first minute after booting I get the following error on my Ubuntu 18.04 LTS setup:

After that the machine just freezes and never reboots. The PC also has a dual boot setup with windows 10 which never crashes.

Recently bought an Acer Predator Helios 300 and was able to create a working Ubuntu 18.04 and Windows dual boot setup in my third attempt.

I really have my doubts whether all the modules have integrated successfully, hence, I keep an eye out for recurring errors in syslog and kern.log. And currently, both the files are being cluttered with the following message:

They occur every minute. The exact logs look like this:

Did some Googling around to find out that acer_wmi is a helper module. And most of the posts related to acer_wmi ultimately leads to blacklisting of the module. However, all of them had a non-functioning WiFi and they blocked acer_wmi to resolve that issue. The Wifi on my computer is working fine (although the connection seems to be a little slow).

I stumbled upon this post which talks about the necessity of blocking acer_wmi. I followed the steps, did a rfkill list all :

None of them are blocked.

Next command was lsmod | grep acer_wmi:

I don’t understand the output at all. But my guess is it lists the services that are attached with acer_wmi. In the aforementioned URL, there are two modules attached to sparse_keymap. So blacklisting acer_wmi from my computer will quite likely disable sparse_keymap?

Is blocking acer_wmi the solution to cluttering of the logs? What should I do? Please advice.

The original title of this question was “Only left half of Wacom Intuos S is working”. The text of the original question preserved below. I have since figured out part of the problem, so I am updating this question.

I am using a Wacom Intuos S on Ubuntu 18.04. If I plug it into the laptop, the device automatically goes into Android mode. This is a known issue with Ubuntu. This is confirmed by the output of libwacom-list-local-devices (output shown in the original question) as well as the output of lsusb which lists the vendor ID of the device as 2d1f (as noted in the link above on the issue). The tablet then behaves erratically.

I can toggle the pad to PC mode by holding the leftmost and rightmost button for a few seconds. The tablet then seems to successfully switch to PC mode: lsusb recognizes the device, the vendor ID updates to the correct value, and the indicator light turns on more brightly. However, now the device does not work at all: the cursor does not respond to the movement of the stylus, it is not recognised by Settings (gnome-control-center), and libwacom-list-local-devices does not list it at all. xsetwacom --list devices also comes up empty.

On my home laptop (very similar to my work laptop) switching the pad to PC mode fixes the issue: I can use the tablet without changing anything or updating any drivers. This is also true for a colleague, who was struggling with exactly the same issue (also on Ubuntu). This suggests to me that my attempt to get my drivers into their most recent versions on my work PC is actually what broke the tablet.

What do I need to do so that my tablet is recognized by my Ubuntu PC when it is in PC mode?

My new Wacom Intuos S connects to my Ubuntu laptop, and responds to input, but only its left half (or really, left third) works properly. In the image below I have marked the area that works properly. 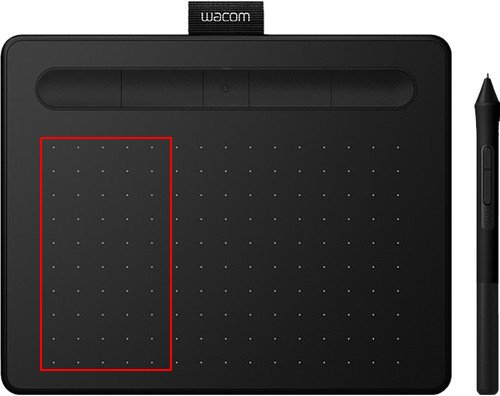 Listing my devices with xsetwacom lists only my stylus and eraser — this is inconsistent with an example I found elsewhere, which lists also a cursor and a pad — but I am not sure if that relates to the problem.

Running libwacom-list-local-devices seems to give a relevant hint to the problem:

The reported height and width seem to match the aspect ratio of the part of the device I am actually able to use. I can find the config file (?) that lists the information above, and simply edit the width field to have a different value (e.g. 5), but that does not actually change anything except the output of libwacom-list-local-devices (I have changed it back to the default value of 2 for now).

This problem seems to be Ubuntu-specific: I have tried the tablet on my boyfriend’s Windows laptop, and it works correctly (after installing the relevant drivers). I have also tried it on my personal laptop, which is nearly identical to my work laptop (also a Lenovo Thinkpad with Ubuntu 18.04) and I have the same problems.

What can I do to get my Intuos pad to work properly? Or how can I effectively troubleshoot?

Please let me know if I should provide any further/more detailed information.

I installed Ubuntu 18.04 on my new HP elitebook 850 G6 after erasing windows. I could not get audio input part working though..
Fn F8 key is orange all the time and this is how settings looks like. 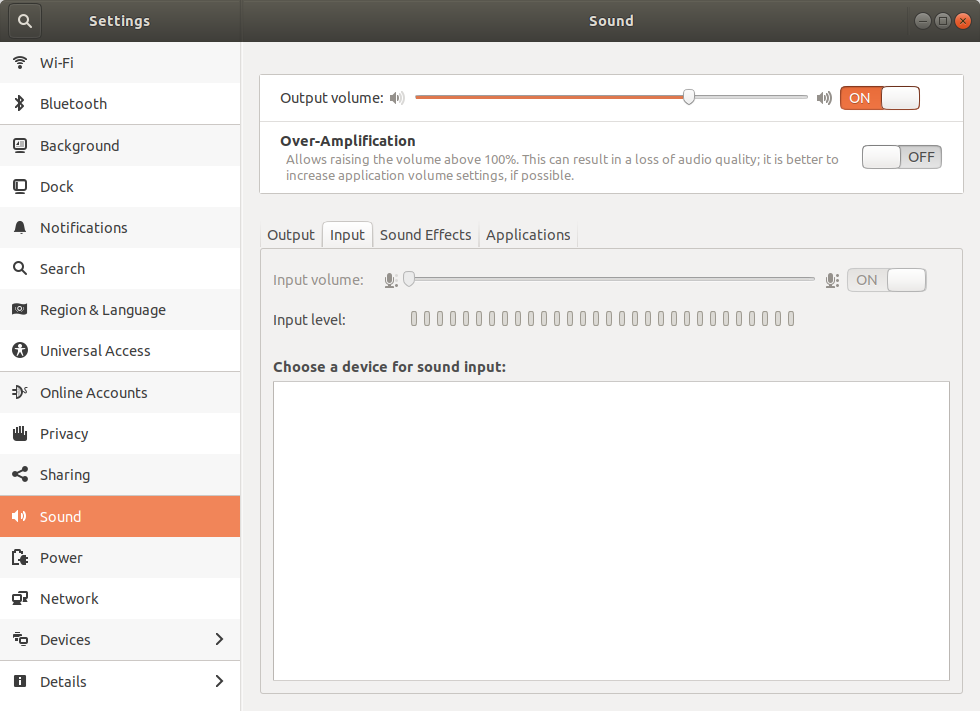 I installed pavucontrol, but that didn’t change anything. What I have noticed is that I cannot check “set as fallback” permanently. 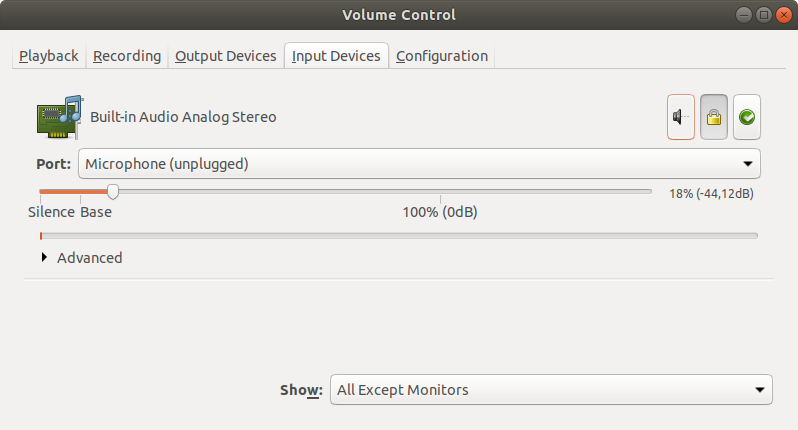 Sound control still does not recognize any microphone

But upon playing game in Wine— it is barely playable, in Windows they DO ran smoothly, and I can confirm Windows actually uses the GPU. I suspected Wine uses my integrated Intel graphics instead.

How would I check that in Wine ? Is there any easy way to figure it out?

I’ve encountered a recent problem with my Samba server (18.04). I have gigabit networking on both ends, but I seem to only get write speeds of about 2MB/s. However, using SSH or FTP, I can transfer files at around 30MB/s which is about what I can expect from my hard drives, so I’m pretty sure the problem is isolated to Samba. Read speeds are about what should be expected. I’ve only noticed this issue recently with 18.04, after I switched from 16.04. I’ve tried tweaking MTU’s, buffers, cache and other things to no avail. I’ve put a fresh install of 18.04 server on another machine and used samba just to see if a fresh install would help, but the issue seems universal to all my machines running 18.04. Any help would be greatly appreciated. My samba conf right now is just the default.