I have an EC2 instance behind an AWS Application Load Balancer, running apache 2.4

The health check is configured to do a GET on /health/

I have virtual hosts configured, and two vhost entries – one with the servername, and one to handle incoming requests directly to the IP address. aaa_first should be loaded first, and therefore be the default.

However, when I go directly to the public IP of the instance, I get the default apache welcome page, and the health check gets a 403:

What do I need to ensure that requests to the IP are blocked, except for the health checks coming from the ELB?

Honestly I don’t know if the queues tuning has been effective.

I’d like to first find out how to troubleshoot the problem to find out the part responsible of the slowniness, so any hint on troubleshooting is appreciated. Thank you

OK there’s 1 thing that maybe I didn’t try (for avoiding a downtime in production): the restart of apache. I thought that the TCP queue of the port 443 was handled by the system alone, i.e. without asking apache which was its limit: wrong. After the restart the queue was finally free to go over 130: in fact, in the first seconds after the apache restart the queue hit the apache limit of 511.

Now that the queue seems ok curl isn’t stuck anymore on Trying to connect; now the problem seems on the apache side, which seems slow even on HTTP.

So please share any thoughts on how to troubleshoot the slowniness. Thank you

In current server has 30 GB MongoDB storage. I have 4 micro service on same server. I have installed pm2 to start all 4 services.

Don’t know why my all services responds delay.

I have checked all code and found there is no 3rd party APIs call and optimize all queries and adding indexing on server. But still server taking too much times.

Most of time I got server timeout error. Please assist me. How to make my server fast.

I’m trying to figure out some issues on my server where my CPU is reaching 100% utilization every other day. This causes all my websites and http services to fail.

How can I configure monit to restart the httpd service when my cpu hits 100% for say 10 cycles?

I’m still new to linux and centos. Learning my way around it and I’ve tried to research this for a while, but I could not find a proper answer to this.

Thanks for your response. When the CPUs are running at 100%, I’ve run the top command and I can see that user nobody is consuming all of it on httpd service. I have a few apps that use php scripts, but their error logs all seem fine.

I’m suspecting a particular wordpress theme is causing this error due to a loop while updating the website. This particular website also shows me a loopback test failed error while all other wordpress sites on the same server are running fine.

So, until I can find out the culprit, I simply want to restart the service httpd when CPU utilization reaches say 95% for 10 cycles.

I hope that is enough clarity for someone to kindly give me a solution.

Using PHP7.3 FPM along with Apache 2.4.25 I have a problem when enabling PHP FPM status page.

But what does not work is replacing /status-php with /status/php in both files (PHP and Apache config). This results in 404 and an Apache error saying:

What is the reason for that? Why is the subfolder-variant not working?

I have a server running Ubuntu 18.04 which has been experiencing huge CPU spike that nearly brings Apache to a halt once or twice a day. The server runs a couple of websites – all php & mysql driven applications. Here’s a bit more detail on things I’ve looked into:

MySQL: Slow query log is enabled and set to log queries taking longer than 1 second. Reviewing this log after a spike reveals nothing in particular. No long running queries to speak of.

CRON: I’ve reviewed all user cron jobs running on the server and there’s nothing that happens during the times when these spikes occur. There are only a couple of CPU intensive jobs and they run around 3am and take approx 5 minutes to complete.

PHP: Both max_input_time and max_execution_time are set to 60 seconds and memory_limit is 64M (this is a 16GB server which typically doesn’t come close to maxing out memory usage).

APACHE: Our host (Linode) has a tool called Longview which shows various diagnostics related to Apache. Despite the huge spike in resources consumed, requests seem to be happening at a normal rate. Manually inspecting the access logs confirms this. Here’s a screenshot of the Apache tab in Longview showing a spike in Workers, CPU and RAM this morning – as well as a relatively normal rate of Requests: 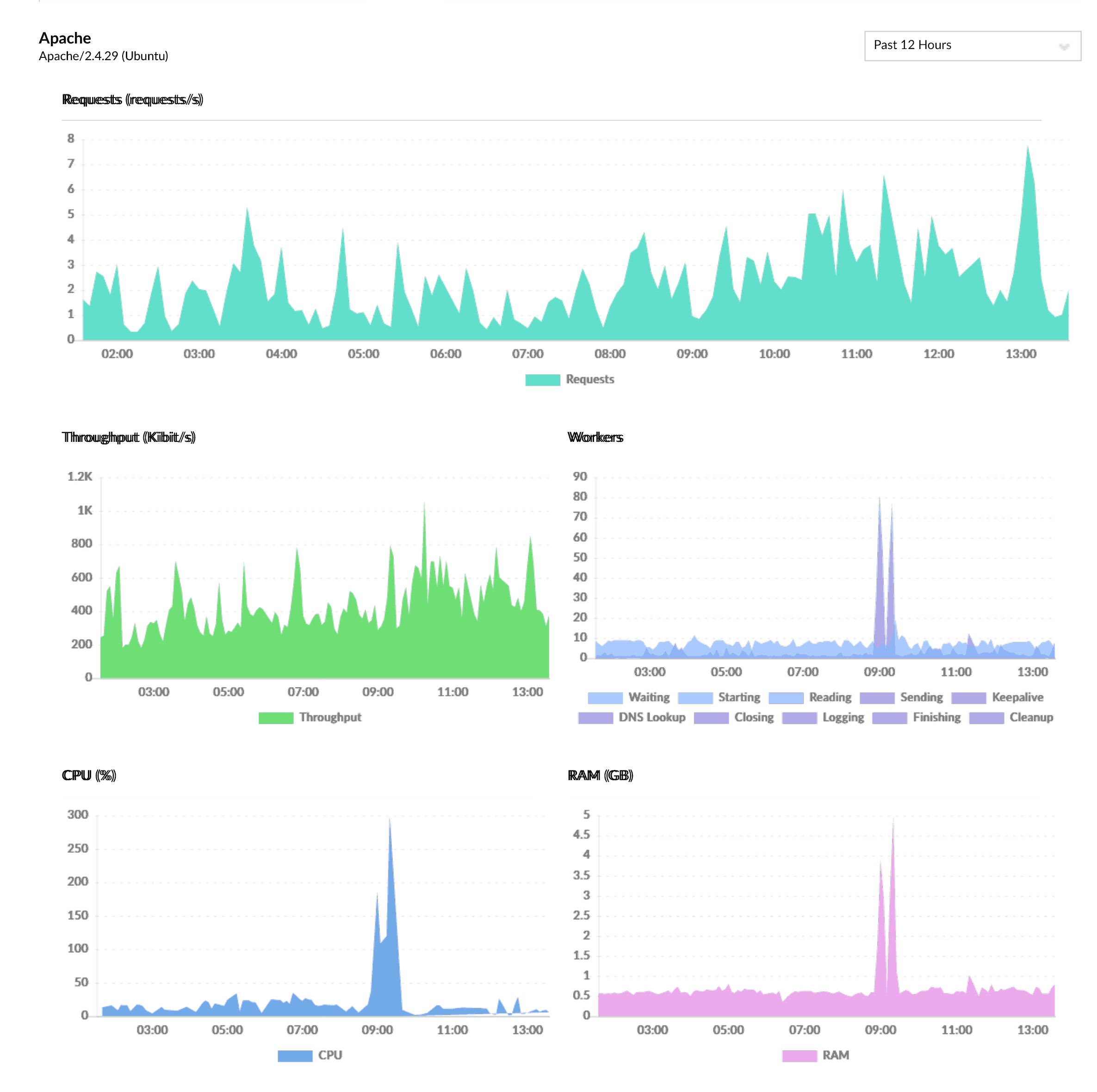 I’ve also added flags in the Apache access logs to show time and I/O data about each request. The end of the LogFormat is time:%T input:%I output:%O. None of the request or response sizes are unusually large (1MB might be the largest response I saw and that was for an image). The only thing standing out is the "time taken to serve the request" which is the %T flag. At a certain point in the morning many seemingly normal requests take 5 – 10 minutes to complete for no apparent reason.

I’m completely stumped at this point. Where can i go from here to diagnose the event that’s triggering this?

Around 2000-2010, shared hosting was extremely popular as a cheap solution (sometimes a few $ / month, or sometimes even free for just a few MB) for people starting blogs, small websites, e.g. using WordPress.

Did they just used ChrootDirectory in sshd_config + different users like in How to create an isolated/jailed SFTP user?
+ <VirtualHost> config with open_basedir to prevent PHP code to access other accounts’ files?

More generally, what were the main isolation techniques, preventing user1234 to access user5678‘s files on the same server with some malicious PHP code?

I’m running an asp.net application on a Kestrel server. The front facing server is Apache. I’m have trouble applying gzip compression on the proxied resources, although any other resources served directly from Apache and not Kestrel are compresses normally using gzip. Below is myhttp.conf, not sure what im missing, help please.

I’m trying to set up group access to certain urls on my reverse proxy gateway. The previous questions that combine proxypass and mod_rewrite do so not for the reasons that I am doing so. I am combining them because I am trying to force an internal redirect (so I can see the HTTP headers.. This is because mod_rewrite cannot see the headers that I want unless I do an internal redirect). (This is a must, unfortunately)

If I remove the rewrite lines, the proxy works as expected (it’s serving the files correctly). However, the group access is not being enforced.

From my apache logs, I see that I’m getting:

One thing that alarms me is that there is only one / in the proxied url in the error log. Is this normal?

Would it be simpler to merge the rewriterules and the proxy lines (if this is possible?)

What syntax should I use to get a working version of my ErrorLog example above?

I have seen Wildcards in Virtual Hosts with dynamic logs? , but it is not really what I am after as it still ends up putting all the logs into one big file rather than having them split into their own subdomain specific folders.