How do i calculate the standard error of $hat{operatorname{cov}}(X, Y)$?

I am trying to learn Bayesian methods, and to that end, I picked up an application of interest to me to develop the concepts in practice.

Suppose I wrote an initial version of a performance-sensitive piece of software, and want to optimize its execution time. I may have a baseline version and an "improved" version (or at least, I suspect it may be an improvement — I need to measure).

I’m looking to quantify how likely it is that this new version is actually be an improvement (as opposed to being equivalent or possibly even worse than the baseline), as well as how much — is it 20% faster? 100% faster? 10% slower? Also I’d like to give credible intervals rather than only point estimates of the speedup.

To that end, I time a number of runs of the two version of the software, trying to keep all other factors the same (input data, hardware, OS, etc.) I also try to kill every running app and service, and even turn off networking, to make sure that, to the extent possible by modern feature-heavy code, these apps have the CPU all to themselves. I also disable Turbo Boost on my CPU to prevent CPU clock rate changes over time and temperature, and run my fans at maximum to minimize the change of CPU thermal throttling (and in practice my computer’s thermal solution is good enough that I’ve never seen this happen). I’ve tried to restrict the portion of the code being measured to the computational part only, so no I/O to add variability.

Despite my best efforts, this is not an embedded system with a single-core processor running on bare metal, so there is some variability, possibly due to OS processes that remain and take up a little bit of CPU, CPU affinity of processes, as well as microarchitectural sources of variability such as caches, out of order execution and hyperthreading.

Currently I’m using the BEST model, implemented by the following code in Python using PyMC3 (heavily inspired by the linked document), in case it is of interest. The arguments are timings of the baseline version (baseline) and improved version (opt):

Issues with the model

The BEST model assumes a Student t-distribution for the values of the execution time, but I have a hunch this is not an adequate modeling assumption.

Given a certain piece of code, one could in principle tally up every single instruction executed, and figure out exactly how fast an "undisturbed" CPU could run it, given the amount of execution resources like ALUs and load/store units, the latency of each instruction, etc. Therefore, there exists a minimum value, bounded by the CPU hardware capabilities, such that the code will never run faster than this. We cannot measure this minimum, though, because the measurements are contaminated by the sources of noise previously mentioned.

Thus, I’d like to think that my model should be the sum of a constant value (the minimum) and some distribution with positive values only, and probably a heavy tailed one, seeing as some outlier event may happen during the execution of the code (the system decides to update an app, or run a backup, or whatever).

To give an idea of the kind of distribution that may be found in practice, I measured 5000 executions of the serial and a parallel version of the same code, for the same input data, and generated histograms for both, with 250 bins each. I’m not claiming this is necessarily representative, but it shows how inadequate the Student t-distribution is for this problem. 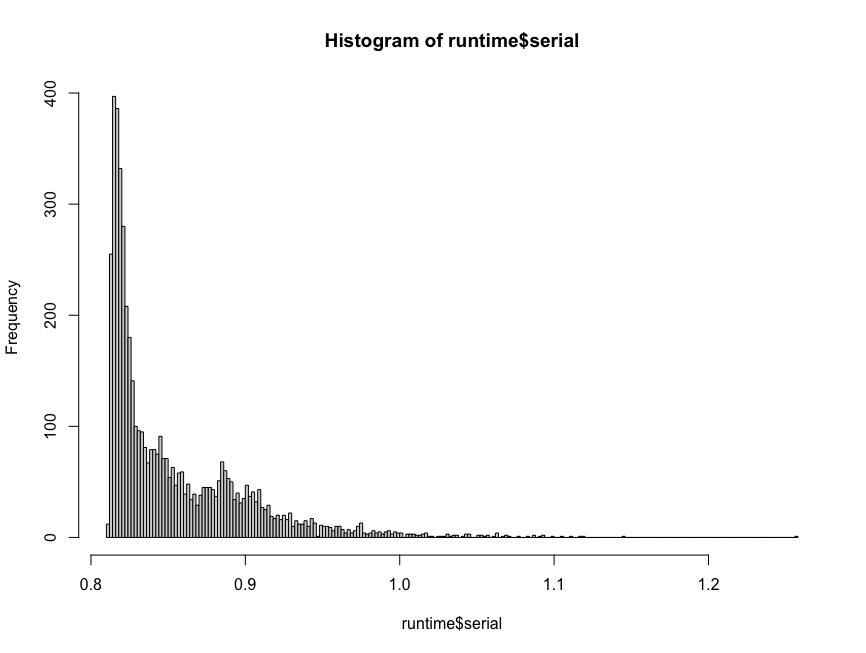 And now for the parallel version: 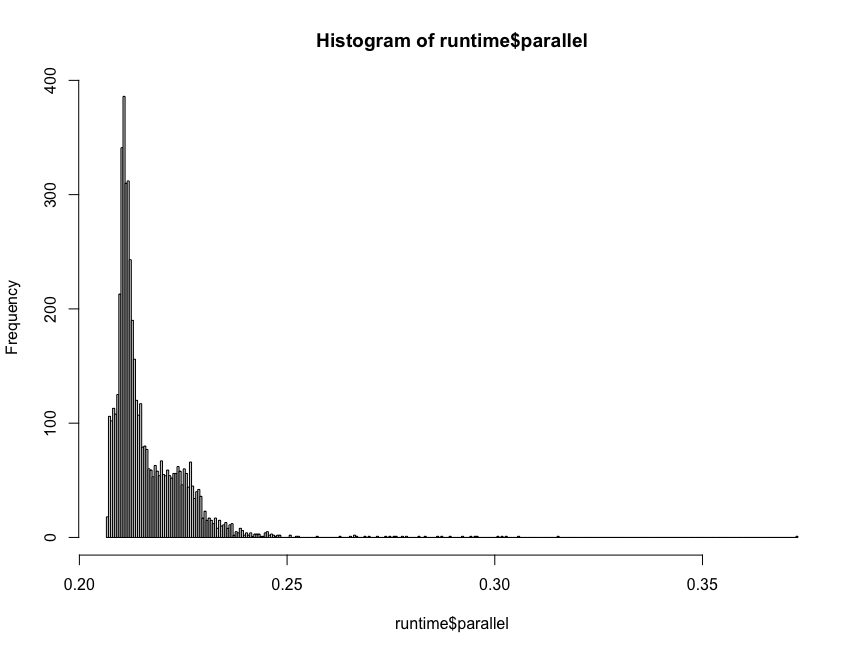 This leads me to the question:

What are some distributions that might be a good fit to this model?

I have a set of experiments on which I apply the Fisher’s exact method to statistically infer changes in cellular populations.
Some of the data are dummy experiments that model our control experiments which describe the null model.

One idea I had:

This essentially will give a new $alpha$ threshold for the original pvalues and transform the results accordingly using the null’s distribution cdf. Are these steps correct? Is using MLE to find the rate correct or it violates some of the assumptions to achieve my end goal? Any other approaches I could try?

So I have a scenario where I n = 8 subjects, each of which have a different source of noise in their respective observations $y$. For example, consider the following:

So clearly each observation/subject has the same true slope but different amounts/sources of noise. Now, I know that the standard error for the linear regression fit has the form:

I’m trying to figure out a better way to make inference for my audio gender classification models.

My current approach is:

Is the calculation above reasonable? However, in this way, my male/female confidence is much lower after adding child. Is there a better way I can use those 2 models for the 3-class classification?

Say you have a variable, like average house cost. You have values of this variable at multiple sites in a city, and want to see how it fluctuates with respect to surrounding business type proportions (multiple classes). For example, at one site, the average home cost is 10 and the surrounding proportions of business types is 30% restaurants, 60% government, and 10% agriculture. What is/are the/any recommended ways to analyze how the housing cost changes with respect to different proportions (over sites)? I am looking for statistical procedures, and have so far come across Redundancy Analysis. However, I’m having trouble figuring out if this is exactly what I’m looking for or if it is optimal. I’ve also looked into canonical analysis and am having the same confusion.

Further, I have different proportions over different spatial scales. For example, around each site I have drawn a circle and calculated the business proportions within the circle. Then I can make the circle a little bigger, and follow the same approach. Finally, I also have data over many years, thus am hoping to add a temporal analysis aspect to this work. Obviously I need to start with a single year and circle (proportion) to keep things simple first, but am looking for guidance in sifting through these layers in the most efficient/ methodological way.

Im working on a dataset of individuals with the covid-19 infection. The dataset consist of 2010 individuals and four columns:

The dataset can be loaded with the following code:

I was thinking it would be a good idea to fit some appropriate models to answer the questions. I already fit a logistic regression model with glm but I don’t see how I could use that to answer these specific questions. For the very last question I believe the mean age in France is significantly higher than in the other countries, which would explain why it seems like the probability of dying from the virus is higher in France based on the data. But Im sure there could be a better explanation.

As mentioned in the title, I want to derive the Cramer-Rao Lower bound from the Hammersly-Chapman-Robbins lower bound for the variance of a statistic $T$.
The statement for the H-C-R lower bound is the following,

However, I want to derive the general form of C-R inequality from the H-C-R bound, i.e. when $k > 1$. But, I have not been able to do it. Though, I was able to figure out that we would have to use $mathbf{0} in mathbb{R}^k$ instead of $0$ and $|Delta|$ to obtain the derivatives, which was obvious anyways, I couldn’t get to any expression remotely similar to the C-R inequality. One of the difficulty arises while dealing with the squares. Since for the univariate case, we were able to take the limit inside and as a result got the square of the derivative. While, for the latter case, we cannot take the limit inside, because the derviate in this case would be a vector and we will have the expression containg the square of a vector which is absurd.

I want to know how to derive the C-R inequality in the latter case?

I measured weight of 5 participants, 5 times each, on 3 different scales accurate to 5 places after decimals.

Since weight is a continuous response variable, if I wanted to use ANCOVA to test for differences between the scales, should I use participant ID (e.g. 1, 2, 3, 4, 5) as a covariate and run the ANCOVA?

Any pointers to the rights statistical test for such an analysis and the R functions I should look at would be greatly appreciated!

EDIT 2: For some additional context: the data has already been acquired as before and we cannot acquire new data. Looking at this data in retrospect, I first thought of ANOVA and then wondered if participant ID should be included as a covariate since measurements were repeated 5 times for each participant on all the scales.

Thanks to @whuber for teasing out the details and enriching the question.

I’m trying to devise a protocol for pooling lab tests from a cohort in order to get prevalence estimates using as few reagents as possible.

Assuming perfect sensitivity and specificity (if you want to include them in the answer is a plus), if I group testing material in pools of size $s$ and given an underneath (I don’t like term “real”) mean probability $p$ of the disease, the probability of the pool being positive is:

if I run $w$ such pools the probability of having $k$ positive wells given a certain prevalence is:

My question is, how do I optimize $s$ (maximize) and $w$ (minimize) according to a prior $p$ in order have the most precise estimates, below a certain level of error?