Apache Ignite(TM) In-Memory Data Fabric is a high-performance, integrated and distributed in-memory platform for computing and transacting on large-scale data sets in real-time, orders of magnitude faster than possible with traditional disk-based or flash-based technologies.

You can view Ignite as a collection of independent, well-integrated, in-memory components geared to improve performance and scalability of your application. Some of these components include:

Apache Ignite has a reach set of APIs that are covered throughout the documentation. The APIs are implemented in a form of native libraries for such major languages and technologies as Java, .NET and C++ and by supporting a variety of protocols like REST, Memcached or Redis.

The documentation that is located under this domain is mostly related to Java. Refer to the following documentation sections and domains to learn more about alternative technologies and protocols you can use to connect to and work with an Apache Ignite cluster:

Fork It on GIT

This is a very small DB Connector code in Java as a wrapper class to Apache DBUtils.

The Commons DbUtils library is a small set of classes designed to make working with JDBC easier. JDBC resource cleanup code is mundane, error prone work so these classes abstract out all of the cleanup tasks from your code leaving you with what you really wanted to do with JDBC in the first place: query and update data.

Some of the advantages of using DbUtils are:

DbUtils is designed to be:

Note Suppose a, b, and c are three different people, then (a,b) and (b,c) are counted as two different teams.

Lisa believes a problem to be special if its index (within a chapter) is the same as the page number where it’s located. Given the details for Lisa’s workbook, can you count its number of special problems?

Note: See the diagram in the Explanation section for more details.

Print the number of special problems in Lisa’s workbook.

The diagram below depicts Lisa’s workbook with n=5 chapters and a maximum of k=3 problems per page. Special problems are outlined in red, and page numbers are in yellow squares. 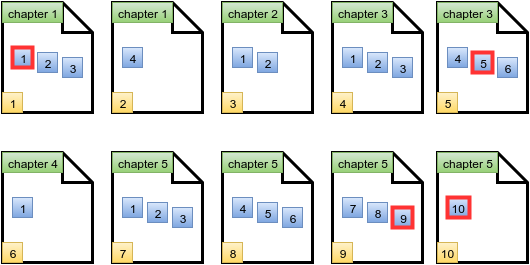 There are 4 special problems and thus we print the number 4 on a new line.

Manasa is out on a hike with friends. She finds a trail of stones with numbers on them. She starts following the trail and notices that two consecutive stones have a difference of either a or b. Legend has it that there is a treasure trove at the end of the trail and if Manasa can guess the value of the last stone, the treasure would be hers. Given that the number on the first stone was 0, find all the possible values for the number on the last stone.

Note: The numbers on the stones are in increasing order.

Output Format
Space-separated list of numbers which are the possible values of the last stone in increasing order.

All possible series for the first test case are given below:

Series with different number of final steps for second test case are the following:

System design is a very broad topic. Even a software engineer with many years of working experience at top IT company may not be an expert on system design. If you want to become an expert, you need to read many books, articles, and solve real large scale system design problems. This repository only teaches you to handle the system design interview with a systematic approach in a short time. You can dive into each topic if you have time. Of course, welcome to add your thoughts!

Here are some articles about system design related topics.

If you are going to have an onsite with a company, you should read their engineering blog.

The following papers/articles/slides can help you to understand the general design idea of different real products and systems.

There are some good references for each question. The references here are slides and articles.
Design a CDN network Reference:

Design a function to return the top k requests during past time interval Reference:

Clarify the scenario, write out user cases Use case is a description of sequences of events that, taken together, lead to a system doing something useful. Who is going to use it and how they are going to use it. The system may be very simple or very complicated. Special system requirements such as multi-threading, read or write oriented.
Define objects Map identity to class: one scenario for one class, each core object in this scenario for one class. Consider the relationships among classes: certain class must have unique instance, one object has many other objects (composition), one object is another object (inheritance). Identify attributes for each class: change noun to variable and action to methods. Use design patterns such that it can be reused in multiple applications.

Given an array of integers, every element appears twice except for one. Find that single one.

Note: Your algorithm should have a linear runtime complexity. Could you implement it without using extra memory?

The basic logic that A XOR A = 0 means that means all the doubles will be XOR’ed out to 0 and the remaining number will be the result of the XOR.

Magnificent app which corrects your previous console command, inspired by a @liamosaur tweet.

Gearman provides a generic application framework to farm out work to other machines or processes that are better suited to do the work. It allows you to do work in parallel, to load balance processing, and to call functions between languages. It can be used in a variety of applications, from high-availability web sites to the transport of database replication events. In other words, it is the nervous system for how distributed processing communicates. A few strong points about Gearman:

Content is being updated regularly, so please check back often. You may also want to check out other forms of communication if you would like to learn more or get involved!

How Does Gearman Work?

A Gearman powered application consists of three parts: a client, a worker, and a job server. The client is responsible for creating a job to be run and sending it to a job server. The job server will find a suitable worker that can run the job and forwards the job on. The worker performs the work requested by the client and sends a response to the client through the job server. Gearman provides client and worker APIs that your applications call to talk with the Gearman job server (also known as gearmand) so you don’t need to deal with networking or mapping of jobs. Internally, the Gearman client and worker APIs communicate with the job server using TCP sockets. To explain how Gearman works in more detail, lets look at a simple application that will reverse the order of characters in a string. The example is given in PHP, although other APIs will look quite similar.

How Is Gearman Useful?

You can use Gearman as an interface between a client and a worker written in different languages. If you want your PHP web application to call a function written in C, you could use the PHP client API with the C worker API, and stick a job server in the middle.

Gearman can also be useful when the worker code is put on a separate machine (or cluster of machines) that are better suited to do the work.
Say your PHP web application wants to do image conversion, but this is too much processing to run it on the web server machines.
You could instead ship the image off to a separate set of worker machines to do the conversion, this way the load does not impact the performance of your web server and other PHP scripts. By doing this, you also get a natural form of load balancing since the job server only sends new jobs to idle workers. If all the workers running on a given machine are busy, you don’t need to worry about new jobs being sent there. This makes scale-out with multi-core servers quite simple. You may have 16 cores on a worker machine. Start up 16 instances of your worker (or perhaps more if they are not CPU bound). It is also seamless to add new machines to expand your worker pool, just boot them up, install the worker code, and have them connect to the existing job server.

For more details on specific uses and installations, go to Gearman’s examples page.